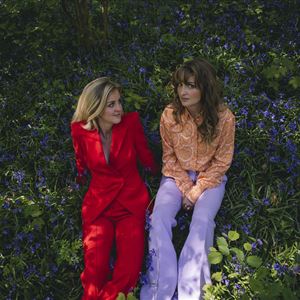 Due to the present circumstances, this show with Ward Thomas now has a new date: Saturday 27th November 2021

We look forward to returning to our glorious, historical church venue in the heart of Kemptown, Brighton for an intimate, acoustic evening with Ward Thomas. We've waited a long time to enjoy live music again with you, and we can't wait for this spectacular evening!

Please be assured tickets will remain valid for the rescheduled date and all the other event details remain the same.

Following the release of their acclaimed UK top 10 album, 'Restless Minds', and being awarded the prestigious 'Global Artist Award' at the CMA Awards earlier this year, country-pop duo Ward Thomas have announced an intimate acoustic tour. The run includes a show at London's captivating Union Chapel on 7th May. The tour sees the twins take in an array of beautiful venues across the UK, in a stripped back light, allowing them to really showcase their incredible harmonies in an up close and personal setting. Across the dates the duo will play fan favourites from their chart topping album 'Cartwheels' and 2019's 'Restless Minds', as well as some brand-new tracks.

2019 has been a massive year for Ward Thomas seeing them tour Europe with Jack Savoretti, before joining him to sing a duet of The Killers' 'Human' at his sold-out Wembley Arena show. They also played a triumphant set at Isle of Wight, supported David Gray across his Australian run and joined Brad Paisley on stage at London's O2 Arena for 'Whiskey Lullaby', all on top of releasing their 3rd album 'Restless Minds'.

The County Affair is an Americana band with influences from the USA and Ireland. Founders Kevin Brennan and Tony Regan are lifelong friends and musical collaborators. Back in the late-70s the guys were teenagers gigging in Irish showbands; then in their early twenties toured the States coast to coast as a folkier new-country duo. Turning down offers to go professional, they both chose corporate careers which, along with raising families, meant that music took a back seat for more than thirty years. Around 2017, Kevin took seriously to song writing and reunited with Tony to form The County Affair and create their own music.A chance encounter led to an approach from producer Tom Nichols, inviting them to record their first album with him at Abbey Road Studios. 2021 sees the release of several singles, then the album - ?Off the Grid' - and all being well some live shows before the year is out.

Dan Owen: From performing for politicians to partying with Willie Nelson, singer-songwriter Dan Owen?s budding music career has already reached some wild milestones. With country and western tropes fluttering throughout his songs, he's got the ability to create catchy tunes that capture even the most sensitivities ups and downs of adolescence.

Owen began gigging around his local Shropshire and Birmingham circuit at just 13 years old along with his older sister, but went solo when she moved to university three years later. His name has been spread in some of the most unconventional ways, particularly on Reddit as he went viral thanks to an audience member posting a video of him covering ?Ballad of Hollis Brown' by Bob Dylan and the views climbed to half a million. He's also featured on The Ellen DeGeneres Show and has even performed on Andrew Marr's weekend politics programme and eventually signed to Atlantic Records.