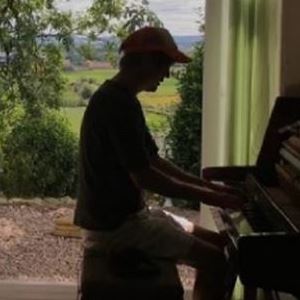 Tiny leaves: Joel will be joined by a violinist & viola players

Tiny Leaves presents a virtual tour, live at dusk from his home studio in the Shropshire hills. Accompanied by Faith Brackenbury on viola, they'll be performing music from his 2020 album Alone, not alone.

Tiny Leaves is the music of composer Joel Nathaniel Pike. His critically acclaimed instrumental music features beautiful string arrangements layered on top of piano and guitar-scapes with additional percussive elements. There is a delicate, cinematic beauty to his compositions.

His music has been featured by Nils Frahm on the iconic ?Piano Day' playlist and he has toured with acclaimed U.S. artist Julianna Barwick. As well as touring his own shows, he has also shared stages with artists such as Hannah Peel, Get The Blessing, Haiku Salut, Sam Amidon and A Winged Victory For The Sullen. His work has been broadcast by Lauren Laverne, Gideon Coe, Stuart Maconie, John Kelly and Chris Hawkins and featured on New York's Newsounds. His music has been used in the Sony's Experia ?Run Your Way' advert, ?The Believer's' stage production by Frantic Assembly and was recently used in the South Korean documentary feature film ?The Long Farewell?.

Tiny Leaves' first EP was released in 2012. His debut album A Good Land, An Excellent Land, released in June 2013, received glowing reviews. Tracks from the album were featured by BBC6Music, with special attention as their ?headphones moment' on Lauren Laverne's show and again as their MP-Free. Tiny Leaves' thirteen track - second album A Certain Tide gained global airplay and was included on Nike's ?mindful miles' running playlist. Notes On Belonging, Tiny Leaves' third album, came out on Pegdoll records in 2017 and tracks from it have been aired by Gideon Coe and Stuart Maconie on BBC6music. His singles The Fullness Of Things and Respair, we're the 2019 forerunners to his fourth album, receiving international airplay and playlisting before the full Alone, Not Alone album arrived in February 2020.

Due to the covid-19 situation, Tiny Leaves is touring this year's release from his home, partnering with different venues and promoters across the U.K.

Tiny Leaves' remarkable music is a joy to listen to at home but seeing [him] live is a transcendent experience. Not since hearing Sigur Ros for the first time has any music moved me so deeply? Five star review from Le Pub, Newport 2019 - Jenny White, What's On - Western Mail

Pike's music is delicate and dramatic in equal measure? The Skinny, Manchester