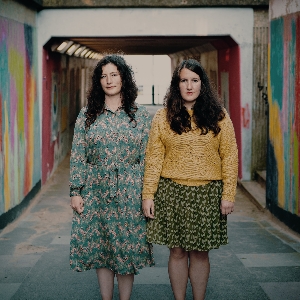 
With their 11 piece band, The Unthanks mark the Autumn release of their new album, Sorrows Away. The Unthanks have been described as "a take on tradition that flips so effortlessly between jazz, classical, ambient and post-rock, it makes any attempt to put a label on them a waste of time". Having previewed Sorrows Away at shows this Spring, the response from live audiences is an early indication that the record is at the very least going to breeze the daunting task of following up their BBC Folk Album Of The Year 2015, Mount The Air. Described as "an epic that Sigur Rós or Elbow would be proud of" by Drowned in Sound, and "as good as it gets... music that asks you to consider everything you know and un-think it" by Folk Radio, Mount The Air was awarded 5 stars
by The Telegraph, R2, fRoots and Songlines, and 4 by Mojo, Q, Uncut, The Times, Independent and Guardian.

The Unthanks tells stories that capture children. They make music cutting edge enough to be BBC 6Music regulars. They can equally be found on Radios 2, 3 and 4, reframing history and drawing together the worlds of folk, jazz, orchestral, electronic and rock music. The believability of their storytelling is admired by some of our best storytellers - Mackenzie Crook, Maxine Peake, Nick Hornby, Martin Freeman, Robert Wyatt, Charles Hazelwood, Ben Myers and David Mitchell, to name a few. Billed as more joyful and uplifting than previous Unthanks records, Sorrows Away is perhaps both the pinnacle and yet just the latest in their story so far.

What the press & people have said about the artists:

"Few of their contemporaries, within both folk music and the wider artistic spectrum, have such a keenly-honed ability to locate in a song the emotional essence that can, in just a single phrase or vocal elision, cut one to the quick." The Independent

"The Unthanks have covered a lot of ground in the past decade and watching them evolve over this period has been truly inspiring." Phillip Selway (Radiohead)

"The honest and heartfelt way in which they deliver their music is a true inspiration to me." Martin Hayes

Say you're coming, join the Facebook event page here.
Watch the: Official Video For The Bay Of Fundy (the first single from Sorrows Away)