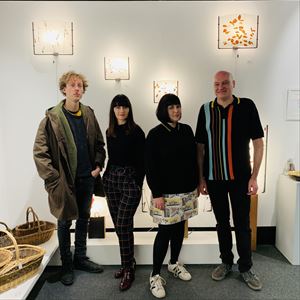 Jetstream Pony come from a love of schrammelig indie-pop and post-punk, and are named after a retired racing greyhound. The band is based in Brighton/Croydon, and features Beth Arzy (The Luxembourg Signal, Trembling Blue Stars, Aberdeen, Lightning in a Twilight Hour) on vocals, Shaun Charman (The Wedding Present, The Popguns, The Fireworks) on guitar and Kerry Boettcher (Turbocat) on bass, with Hannes Müller (The BV's, Endlich Bluete) on drums. The band released their self-titled debut LP in May 2020. Two pressings quickly sold out, the album was reissued by Spinout Nuggets in the Autumn and is now also in the second pressing. Jetstream Pony received rave reviews (including five stars in Shindig Magazine) and was included in many annual ?best of? lists.

Forward to Nov 2021, and the band have now returned with the six track mini-album ?Misplaced Words, a co-release on vinyl and CD between Spinout Nuggets and Shelflife Records in North America. The album develops the sound from the debut album, with the balance between indie-pop and something darker intact. Twelve string guitar is underpinned by heavy bass, harmonies by a sometimes two drummer rhythm section.
Jetstream Pony have played gigs around the UK and Germany, including support for The Wedding Present just before lockdown, recently resuming where they left off. Many shows originally planned for last year are now scheduled for 2022, including trips to Portugal and Spain as well as more in the UK.

Pitched between infectiously melancholic indie-rock and angular, post-punk inflected stomps, Hadda Be originally formed under the name Foundlings in 2018, spread across joint hometowns of London and Brighton. Their first two singles, ?Misery' and ?Horizon', received generous airplay on BBC 6 Music and Radio X, as well as BBC Introducing the South. The following year saw the release of the band's debut EP, a run of festival performances across the UK, and two sold-out release shows at the Sebright Arms (London) and Stereo (Glasgow). Another Life, Hadda Be's debut LP, was recorded in five days at Brighton Road Studios in between the two national lockdowns of 2020 and was released by Last Night From Glasgow in April 2021. On the album, the band state, ?There's a vibrancy and an energy to our live shows, a distinct personality that we wanted to immortalise in our debut album. Due to the coronavirus lockdown restrictions, the recording of the album was delayed twice. By the time we finally managed to get into the studio, we had the songs down to an extent that we recorded most of them in only a few takes.? That immediacy is palpable throughout the album, the band achieving what they set out to do, capturing their spirit over the course of five intense and unforgettable days.

Shoegazey dream pop duo, Jane and Andrew Craig are from Brighton, formally known as Dreams of Empire this husband and wife team use an obsessive interest in 80s/90s indie music, to take influences from the past and reshape them into their own sound.

Most recently they released their second album ?Encapsulation? which includes the single ?Hidden Girl?. Recorded by the band in lockdown 2020 and mixed remotely by Steve Whitfield (The Cure, Pale Saints).