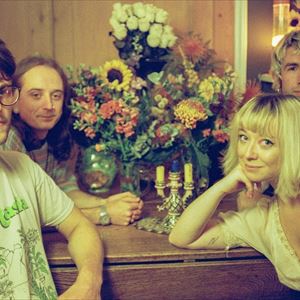 Please be assured tickets already purchased will remain valid for the rescheduled date, all other event details remain the same. Please visit the Facebook event page for further details and updates:https://www.facebook.com/events/166971607863725

A word from HANYA: 'It's a comfort to look forward to all the things we'll be doing post-isolation. It already feels like years since HANYA played together, so we're very happy to have a new date in place for our show in Brighton. Join us on the 6th May for what we promise we'll make one hell of a show, with a newfound gratitude for all things live. With love - HANYA.

Making their ascent from Brighton's thriving talent pool, indie upcomers HANYA continue to show us they have a lot to offer. Named after the hannya mask traditionally worn in Noh theatre, the group was originally constructed by guitarist and vocalist Heather exploring the many faces of a female psyche; later the fully-formed collective emerged, recruiting three friends with impressive musical backgrounds to assemble the dream-pop quartet.

Thanks to the group's captivating songwriting, hazy soundscapes and thick-grooved basslines, HANYA have received a whirlwind of support across the alternative scene from key UK tastemakers in radio, including Jack Saunders, Huw Stephens (BBC Radio 1) and Tom Robinson (BBC 6 Music), as well as a plethora of support from leading UK DIY press including The Quietus, Gigwise and Line of Best Fit.

Following on from their trip stateside to New Colossus festival in NYC, HANYA released 'Texas' the follow-on single from their EP Sea Shoes. The track received a wash of support across the alternative realm, leading to Clash Magazine naming it 'A gorgeous shoe gaze hymn' and Jack Saunders remarking "It's a beauty, that." During his hotly-tipped BBC Radio 1 Indie Show.

Don't miss your chance to catch HANYA's intimate shows before they follow-on in the steps of their peers, this group have guaranteed their spot as a band with momentum.

What Hanya do incredibly well is performing musical u-turns. Their songs may start off as an earnest ballad then - BAM! it's a full-blown post-punk rager. The Quietus.

Having toured all over the UK and Europe, Brighton based alt-folk solo artist Amelia Caesar isa prolific live performer with Glastonbury Festival, 2000 Trees and The Great Escape under her belt as well as a sold out show in Budapest supporting Margaret Island.

With an amazing response to her single 'I Think We're Home', Amelia is looking forward to releasing new music in 2020.

Indie/Post Shoegaze outfit The Daylight hail from the suburbs of South East London & Brighton. Formed by Jacob Shoobridge-Chandler (Lead Singer & Guitarist), Theo Byrd (Bass) and Alex Probert- Jones (Drums).
With musical influences that range from The Cure to Sonic Youth to The Murder Capital, the band draw lyrical inspiration from personal issues including 'Mental health, romance, grief and the ever evolving decline in the landscape of modern society'.

Their debut single 'Department of Dreams' released in October 2019 via their own record label Stay Happy is a plea, a war cry, to acknowledge the effects of climate change and its consequences, whilst attempting to unify the people of the streets encouraging them to act now. The song has received rave reviews from BBC Introducing, BBC 6 Music and Radio X.