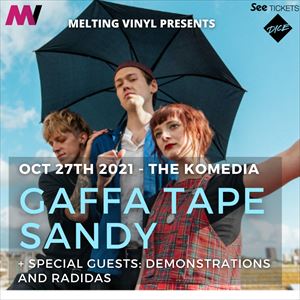 14+ only. 14s to 16s must be accompanied by an adult. No refunds will be given for incorrectly booked tickets.

Melting Vinyl are thrilled to present Brighton's explosive punk-pop trio Gaffa Tape Sandy, plus support from dark guitar pop trio Demonstrations and electronic dance duo RADIDAS. Members of each act either are managed by or work producing all our fantastic shows at MV. Let's celebrate this!

Formed in 2015 by three friends with a desire to do something loud and exciting, their popularity quickly escalated thanks to a series of incendiary live shows and a seemingly endless succession of instantly memorable garage-punk/rock tunes.
The Brighton/Bury St Edmunds outfit's brand of giddily frantic, high-octane hyper rock 'n' roll has already landed them support slots with acts including IDLES, Peace, Art Brut, Weakened Friends, SuperGlu, Bloody Knees and UK tours supporting Indoor Pets & Skegss. Their debut EP 'Spring Killing' lead to them performing at Glastonbury Festival 2017, with their next single 'Beehive' gaining much support including Huw Stephens' BBC Radio 1 Tip Of The Week, before being included in NME's 100 Essential Acts for 2018.

The past two years have seen them performing all of the UK festival circuit, from Live At Leeds & Liverpool Soundcity, to Latitude & The Great Escape Festival, as well as a number of international festivals across Iceland & Germany. In 2019 they announced their signing with Alcopop! Records, with their second EP ?Family Mammal' released on Friday 26th July on vinyl & digital platforms.

"Get to know Gaffa Tape Sandy now, because soon everyone else will and you'll feel really left behind. (In other words: they're really great)"
- BBC Introducing

"A dubious name, infectious melodies and punk rock sensibilities - what more could you possibly want from a band?"
- The Line Of Best Fit

"The trio make sugary, garage-rock treats that are both rollicking good fun, and also a right old mess, in the best possible way."
- DORK Magazine

"Urgent and riotous garage rock that packs both bark and bite."
- NME Magazine

Demonstrations are an alternative dark guitar pop three-piece based in Brighton, UK, combining eclectic influences of 80s synth new wave and indie rock. Building a collection of singles over the past few years Demonstrations have been making waves with their 80's spangled synth dreams, embellished with a dark twist of gritty guitars and bittersweet tones. The band began as a bedroom project four years ago by creating self-produced demos, they spent an entire year rehearsing and writing before playing their first shows towards the end of 2017. Following multiple successful singles, Demonstrations continued to explore electronic genres and spent the rest of 2019 carefully curating this sound and the use of samples, synths in an intensive writing process that revolutionised their set. The band debuted this exciting direction through the release of 'Clang!', with an electrifying sold-out single launch at The Hope & Ruin with Stoked and Broke. The single received fantastic feedback after it caught the attention of BBC Introducing's Melita Dennett, who featured the track on the BBC Introducing: The South radio show. Demonstrations' release 'King Craig' is a wild dive into indie punk, with disco beats and a turbulent effects loop creating a rollercoaster experience into Demonstrations' ever-evolving sound. Over lockdown, unable to put their usual energy into live shows, the band instead focused their creativity into creating a completely DIY music video to accompany ?King Craig' - the single and accompanying video is out now on all major streaming platforms

Melting Vinyl looks forward to welcoming each of these artists to The Komedia this October in a celebration of our staff and their associations.

SNAYX have been confirmed as the opening support, the British punk rock duo hailing from the South East, are renowned for ferocious live sets and visceral, hard-hitting bass riffs. The serpents have supported international acts such as D-Boy, Kid Kapichi, Nova Twins and more since their formation in late 2018.

"They'll rip a hole in the Space-Time Continuum" - Jack Saunders