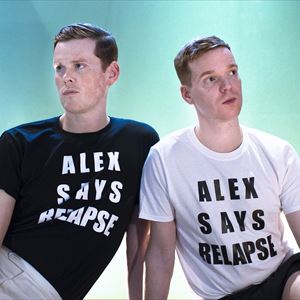 A New Date for Alex Rex Monday 18th October 2021 Melting Vinyl are excited to announce this new date for our show with the spellbinding Alex Rex times. We are working to safeguard performers, audience, our venues and their staff and we are thrilled to have a new date for this show Tickets already purchased will remain valid for the rescheduled date and all other event details remain the same. Please visit the Facebook event page for updates and further details

This show was originally scheduled for 14th April 2020 at The Westgate Chapel in Lewes but has now changed venue to The Greys in Brighton.
Founding member and chief songwriter of critically acclaimed folk revivalists Trembling Bells, Alex Rex is the nom de guerre of Alex Neilson - drummer to some of the most innovative musicians on the international underground, including Bonnie "Prince" Billy, Shirley Collins, Jandek and Current 93. Alex has synthesised the agonised self-invention and charismatic death-drive of these artists into his solo vehicle - abandoning the folk-rock pomp of his previous band Trembling Bells for something darker and wilder.

Following the critical success of his second solo album Otterburn (2019) which was a heartfelt response to his brothers sudden death on 2017 Alex Rex returns with songs of love, loss and loathing in his third vehicle ANDROMEDA on independent label Tin Angel

ANDROMEDA is a game of emotional snakes and ladders. It's the product of two years spent in therapy, the gym and on Tinder. It opens with the voice of folk legend Shirley Collins in "Song of Self Doubt" - a sparse assemblage of spoken words layered on bright chimes and birdsong. And from there we wander down corridors of cruelty, recklessness and recrimination.

"I Am Happy" is a gut-punch to the brain. Think classic-era Nick Cave but without the gothic posturing. "Haunted House" is a ghost-rock ballad about an emotional poltergeist looking for love. "Rottweilers" is a song about the hell hounds of the mind - the phantoms of self-deception and self-destruction that impress themselves on the brain like a depressed Mount Rushmore. "Coward's Song" sets some lines from Richard III to a skeletal country waltz and was recently recorded by Bonnie "Prince" Billy. "I'm Not Hurting No More" sounds like poetry etched out by a pneumatic drill in an electrical storm, while album closer "Pass The Mask" is about the anxiety of childbearing by someone who has never borne a child - passing the relay baton of disappointment from generation to generation. It's Philip Larkin's head on Cat Stephen's body.

Featuring a consolidated line up of long-time collaborator Rory Haye, with Audrey Bizouerne (Rev Magnetic / Bill Wells) and Georgia Seddon (Mike Heron / The Incredible String Band) along with guest appearances from Shirley Collins and Stevie Jackson, ANDROMEDA is the first ghost rock album. Self loathing has never sounded so sexy.

Victor Herrero gives true meaning to the proverbial figure of the troubadour. Through the medium of voice and his beautiful Spanish guitar playing he channels shades of Leonard Cohen, Fred Neil and #VictorJara.
His album 'Hermana' is an expansive paean to all the sisters who stand by our side, who care for us and from whom we learn from.
Check out the title track for 'Hermana' here: https://bit.ly/2Wf8q9Y
Elle Osborne
Elle Osborne was born on the North Sea coast of Lincolnshire where she taught herself to play the fiddle (and ride Gypsy horses on the beach ~ although that's another story). She was raised amongst folk singers and wrote songs from an early age.
Elle's debut cd, 'Testimony', featured in the fRoots magazine Best of Year Critics' Poll, and was reviewed as ?...One of the most compelling performances of the year?.
Her 2011 release 'So Slowly, Slowly Got She Up' was Album of the Week in The Independent, and gained Elle a nomination for Singer of the Year from Spiral Earth.
Her 2015 release, 'It's Not Your Gold Shall Me Entice', was Elle's first album of self-written songs, of which Folk Radio UK said, "With songwriting like this, it is hard to believe that it has taken Osborne so long to begin committing her own material to tape. We can only hope she doesn't stop there?. 'If You See a Rook on its Own, it's a Crow' is Elle's fourth album, and sees her joined by long-time kindred collaborators Alasdair Roberts and Alex Neilson
(Trembling Bells, Bonnie Prince Billy). The album also features Eddie Myer (Turin Brakes) and Stephen Hiscock (Mark Eitzel band), and is mixed by Joe Watson (Stereolab), bringing an electrifying new dimension to her unique sound.
"Osborne has the lyrical and melodic gifts to achieve crossover success, but it's these more experimental numbers which really prove her mettle" Wire Magazine
"Raw and compelling, passionate and engaging" Time Out
Victor Herrero
The dexterous guitar magician Victor Herrero gives true meaning to the proverbial figure of the troubadour. By means of his voice and instrument only, he is capable of remarkable transmissions. Spanish guitar and singing: That's what shapes Hermana; a simultaneously uncanny, courageous and comforting album for our young century.
Hermana pays homage to all the sisters who stand by our side, who care for us and from whom we learn from. The record takes place among still lifes, ploughed lands, crepuscular bygones and dim light confessions. Victor's voice - truly tempered after many years on the road - spills a healing magma; describing settings in an exquisite use of the Spanish language.
Hermana dissolves the differences between the diverse musical traditions it draws from - be it medieval, Andean, Andalusian, Mexican... Sources flow into a single bed thanks to the heated, swirling pulse of Victor's guitar: a galleon of loose ropes in which the most crystalline strum transmutes into dance and wooden tones are always welcomed.
With shades of Leonard Cohen Víctor Jara and Fred Neil it is a gift to receive the songbook so essential and discreetly articulated as this. It implies a declaration of intentions, and even more importantly, a contribution. Perhaps no one expects in 2020 a record such as Hermana, but we all need it.